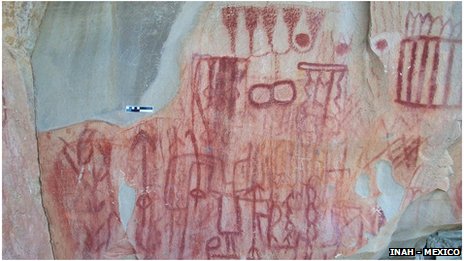 Archaeologists found more than 1,500 paintings in one cave of the Burgos region
Continue reading the main story

Archaeologists in Mexico have found 4,926 well-preserved cave paintings in the north-eastern region of Burgos.

The images in red, yellow, black and white depict humans, animals and insects, as well as skyscapes and abstract scenes.

The paintings were found in 11 different sites - but the walls of one cave were covered with 1,550 scenes.

The area in which they were found was previously thought not to have been inhabited by ancient cultures. 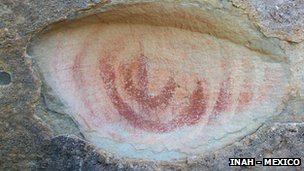 The paintings suggest that at least three groups of hunter-gatherers dwelled in the San Carlos mountain range.

Experts have not yet been able to date the paintings, but hope to chemically analyse their paint to find out their approximate age.

"We have not found any ancient objects linked to the context, and because the paintings are on ravine walls and in the rainy season the sediments are washed away, all we have is gravel," said archaeologist Gustavo Ramirez, from the Mexican National Institute of Anthropology and History (Inah).

In one of the caves, the experts found depictions of the atlatl, a pre-Hispanic hunting weapon that had not yet been seen in other paintings in the Tamaulipas state. 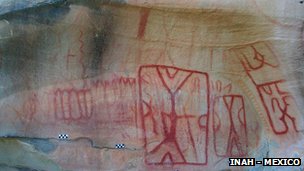 The paintings are being considered an important find because they document the presence of pre-Hispanic peoples in a region where "before it was said that nothing was there", Mr Ramirez said.

Another archaeologist involved in the Inah study, Martha Garcia Sanchez, said that very little is known about the cultures who dwelled in Tamaulipas.

"These groups escaped the Spanish rule for 200 years because they fled to the Sierra de San Carlos where they had water, plants and animals to feed themselves," she said.

The findings were presented during the second meeting of Historic Archaeology, in Mexico's National History Museum.