Exquisite artworks hidden under 2,000 years of soot and grime in a Jordanian cave have been restored by experts from the Courtauld Institute in London 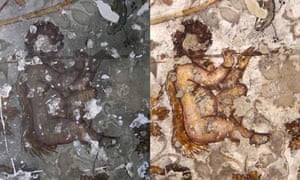 Detail of a winged child playing the flute, before and after
cleaning. Photograph: Courtesy of the Courtauld Institute

Spectacular 2,000-year-old Hellenistic-style wall paintings have been revealed at the world heritage site of Petra through the expertise of British conservation specialists. The paintings, in a cave complex, had been obscured by centuries of black soot, smoke and greasy substances, as well as graffiti.

Experts from the Courtauld Institute in London have now removed the black grime, uncovering paintings whose "exceptional" artistic quality and sheer beauty are said to be superior even to some of the better Roman paintings at Herculaneum that were inspired by Hellenistic art.

Virtually no Hellenistic paintings survive today, and fragments only hint at antiquity's lost masterpieces, while revealing little about their colours and composition, so the revelation of these wall paintings in Jordan is all the more significant. They were created by the Nabataeans, who traded extensively with the Greek, Roman and Egyptian empires and whose dominion once stretched from Damascus to the Red Sea, and from Sinai to the Arabian desert.

Such is the naturalistic intricacy of these paintings that the actual species of flowers, birds and insects bursting with life can be identified. They were probably painted in the first century, but may go back further. Professor David Park, an eminent wall paintings expert at the Courtauld, said that the paintings "should make jaws drop".

At the instigation of the Petra National Trust (PNT), conservation experts Stephen Rickerby and Lisa Shekede restored the paintings to life. The work took three years, and was completed only last week. "The paintings were a real mess," Rickerby said.

He described what has emerged from the blackened layers as "really exceptional and staggeringly beautiful, with an artistic and technical quality that's quite unlike anything else".

Three different vines, grape, ivy and bindweed – all associated with Dionysus, the ancient Greek god of wine – have been identified, while the birds include a demoiselle crane and a Palestine sunbird with luscious colours. The scenes are populated by putti-like figures, one winged child playing a flute while seated in a vine-scroll, others picking fruit and fighting off birds pecking at the grapes. The paintings are exceptional in their sophistication, extensive palette and luxurious materials, including gold leaf.

Petra – the Greek word for "rock" – is one of the world's most famous archaeological sites, where ancient eastern traditions combine with Hellenistic architecture, with monumental buildings sculpted out of the solid red sandstone. A Unesco world heritage site since 1985, it was the Nabataeans' capital city, flourishing as an economic and religious centre from the third century BC for some 400 years. Its site, in the Shera mountains, was an important crossroads for Arabia, Egypt and Syria-Phoenicia.

The paintings are not at the main site, but at the less well known canyon of Siq al-Barid in Beidha – nicknamed "Little Petra" – about 5km away. As they are now the most important surviving examples of Nabataean art, they rank among Petra's most remarkable treasures and are likely to become a major tourist attraction, Rickerby said. They are located within the "biclinium" (dining area), a principal chamber and a recess, where ritual dining is thought to have taken place. The most outstanding painting covers the vault and the walls of the recess.

The site was a retreat for affluent Nabataeans. The surrounding land shows evidence of ancient vineyards and grape-pressing sites, which explains the significance of the paintings' subject-matter. The Greek historian Strabo conveyed a sense of their wealth when he wrote: "The Nabataeans are a sensible people, and are so much inclined to acquire possessions that they publicly fine anyone who has diminished his possessions."

Rickerby said: "They show a lot of external influences from the ancient world and are as good as, or better than, some of the Roman paintings you see, for example at Herculaneum… This has immense art-historical importance, reflecting a synthesis of Hellenistic–Roman cultural influences."

Park said: "Petra is a vast site at the cultural crossroads of the eastern Mediterranean, and among the rock-cut tombs and temples the survival of a fragile wall painting that decorated a dining hall is extraordinary… The quality of the painting is matched by the luxury of its materials, including gilding and translucent glazes. It is the only surviving [in situ] figurative wall painting from the Nabataean civilisation that created Petra.

"It provides an incredibly rare insight into the lifestyle of this ancient and little-known civilisation."