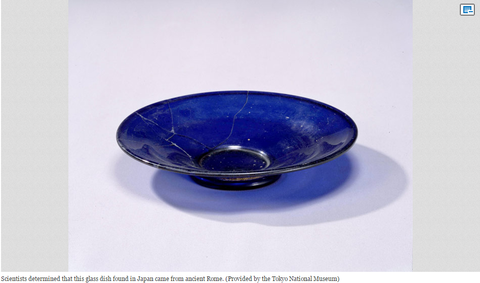 KASHIHARA, Nara Prefecture--A glass dish unearthed from a burial mound here is the first of its kind confirmed to have come to Japan from the Roman Empire, a research team said.

A round cut glass bowl, discovered with the glass plate, was found to have originated in Sassanid Persia (226-651), the researchers said.

The researchers’ scientific studies show that fifth-century Japan imported glasswork, and that there was a wide range of trade between the East and the West.

“The dish was likely produced around the Mediterranean Sea and then transferred to Sassanid Persia,” said team leader Yoshinari Abe, an assistant professor of analytical chemistry at the Tokyo University of Science. “After it was painted there, the plate was probably taken to Japan.”

According to the team’s analysis, the chemical composition of the clear dark blue dish is almost identical to glasswork unearthed in the area of the Roman Empire (27 B.C.-A.D. 395).

Measuring 14.1 to 14.5 centimeters in diameter, the flat, raised dish is believed to have been created in the second century at the latest.

The dish has been designated a national important cultural property and is currently owned by the Tokyo National Museum.

The scientists used a special fluorescence X-ray device to analyze chemical elements in glass powder from the dish.

The chemical compositions of natron, a type of sodium mineral, as well as sand made of silica and lime, resemble those typically found in Mediterranean glasswork produced in the Roman Empire and the following Eastern Roman Empire period.

The team also conducted a fluorescence X-ray test on the dish using a high-energy radiation beam at the Spring 8 large synchrotron radiation facility in Sayo, Hyogo Prefecture. The test revealed antimony, a metallic element believed to be used in Rome until the second century.

The results mean that it took centuries for the dish to arrive in Japan and be buried in the grave after it was produced in Rome.

Abe and his colleagues also revealed that the chemical composition of the cut glass bowl is the same as that of glass fragments unearthed from the remains of a palace in the ancient Persian capital of Ctesiphon. The bowl is 8 cm in diameter, 7 cm tall and narrower in the upper part.

“Japan aggressively traded with other countries in the fifth century, and (the latest findings) show various elements were entering Japan at the time,” said Takashi Taniichi, a Silk Road archaeology professor at Sanyo Gakuen University. “Because the glass dish may have been transported via Central Asia, it is no wonder that there was a time lag (between its production and arrival in Japan).”

The team’s research results will be presented at a conference of the Association for Glass Art Studies, Japan, scheduled for Nov. 15 at the Tokyo University of Science in Shinjuku Ward.

The dish and bowl are on display at the Tokyo National Museum until Dec. 7.