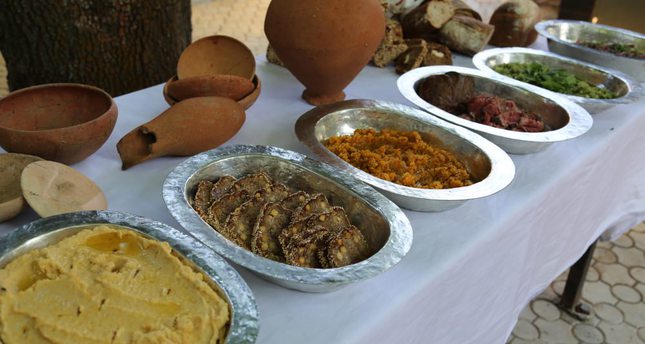 An archaeological team excavating the ancient site of Alacahöyük, one of the most significant centers of the ancient Hittite civilization, cooked pastries belonging to Hittite cuisine that dates back 4,000 years. The foods found on Hittite tablets were cooked without modern technology or equipment

The 4,000-year-old Hittite cuisine was cooked in Alacahöyük, an important Neolithic settlement and Turkey's first nationally excavated area. Aykut Çınaroğlu, the head of the excavations and professor of archaeology at Ankara University, told Anadolu Agency (AA) that Chef Ömür Akkor, an excavation team member, prepared a special Hittite menu in light of the available archaeological findings. "We conducted research on kitchen culture, food and bread of Anatolian-Hittite cuisine dating back 4,000 years," he said. Akkor added that the food was cooked by imitating the period's conditions. "Ancient settlers wrote that they ate cold meat, cooked onion and bread on a festival day. They did not use yeast while making bread or cook them in moist ovens. The team tried to make it with pounded wheat, not sifted flour," he said.

Akkor said experimental foods were cooked using findings found on ancient tablets. "There is a lot of information about food culture on Hittite tablets. We used buckwheat brought from Germany for cooking. It was crushed on stones and we did not use kitchenware other than a knife. Considering the conditions at the time, we understood that the Hittites were highly successful in the kitchen as well as in other areas," Akkor said, adding that more than 100 pastry names were found on Hittite tablets. During the excavations, findings about olive oil, honey, beverages and vegetables were also discovered. Underlining the hygienic measures taken in Hittite kitchens, Akkor said if a chef with a large, unmanaged beard or long, unmanaged hair cooks in the kitchen or an animal wandered into the kitchen, he or she used to receive a death penalty along with their family. The rule was valid for those who cooked without having a bath beforehand. "These rules show how the Hittites took sanitary issues very seriously 4,000 years ago," he said.

The excavations in Alacahöyük were first started in 1907 by Ottoman archaeologist Makridi Bey. In 1935, Mustafa Kemal Atatürk, the founder of the Republic of Turkey, re-started it by providing funds for the excavation. Currently, the excavations are conducted by Ankara University. Alacahöyük is seen as a significant tumulus of the Hittites, who migrated to Anatolia in around 2000 B.C. Çınaroğlu said interesting and informative findings have been uncovered during the excavations. Copper chunks found in a mining workshop that date back 3,700 years and bronze brooches are among the most interesting ones.

Here are some highlights from the Hittite menu:

Mulati (made from barley)

Ninda.gur.ra (with cheese and fig)

Beruwa with cucumber (beruwa is the name given for mashed food. There are many kinds)

Happena (a casserole of meat, olive oil and honey)

Sandwiches (according to Hittite tablets, sandwiches were made with cooked meat and onion)

Turkey's well-known ancient site of Alacahöyük, which currently draws around 50,000 visitors annually, is located in the central Anatolian province of Çorum. The ancient site was one of the most significant centers of the ancient Hittite civilization and also Turkey's first national excavation site. Works at the site are set to continue in order to uncover more clues like those found last year in order to prove settlement in the area began 1,500 years earlier than previously thought. Alacahöyük was first introduced to the archaeology world in 1835 by W. C. Hamilton, but has since been frequently visited by many scholars who came to Asia Minor. The Alacahöyük excavations have been overseen by Çınaroğlu since 1998. The first excavations began at the ancient site in 1907 and lasted only 15 days, and were restarted in 1935. Artifacts such as sun disks, bull and deer statues and 13 tombs of Hittite kings show the high culture of the era. The Sphinx Gate and the reliefs are the reflections of Hittite Religious Ceremonies that have survived to present day.