Black death was not spread by rat fleas

Black death was not spread by rat fleas, say researchers. Evidence from skulls in east London shows plague had to have been airborne to spread so quickly. 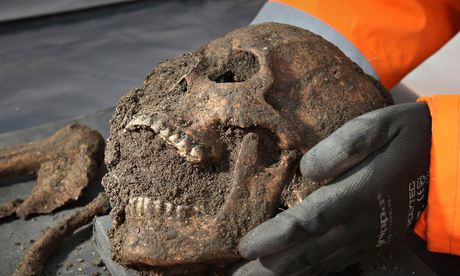 Archaeologists and forensic scientists who have examined 25 skeletons unearthed in the Clerkenwell area of London a year ago believe they have uncovered the truth about the nature of the Black Death that ravaged Britain and Europe in the mid-14th century. Analysis of the bodies and of wills registered in London at the time has cast doubt on "facts" that every schoolchild has learned for decades: that the epidemic was caused by a highly contagious strain spread by the fleas on rats. Now evidence taken from the human remains found in Charterhouse Square, to the north of the City of London, during excavations carried out as part of the construction of the Crossrail train line, have suggested a different cause: only an airborne infection could have spread so fast and killed so quickly. The Black Death arrived in Britain from central Asia in the autumn of 1348 and by late spring the following year it had killed six out of every 10 people in London. Such a rate of destruction would kill five million now. By extracting the DNA of the disease bacterium, Yersinia pestis, from the largest teeth in some of the skulls retrieved from the square, the scientists were able to compare the strain of bubonic plague preserved there with that which was recently responsible for killing 60 people in Madagascar. To their surprise, the 14th-century strain, the cause of the most lethal catastrophe in recorded history, was no more virulent than today's disease. The DNA codes were an almost perfect match. According to scientists working at Public Health England in Porton Down, for any plague to spread at such a pace it must have got into the lungs of victims who were malnourished and then been spread by coughs and sneezes. It was therefore a pneumonic plague rather than a bubonic plague. Infection was spread human to human, rather than by rat fleas that bit a sick person and then bit another victim. "As an explanation [rat fleas] for the Black Death in its own right, it simply isn't good enough. It cannot spread fast enough from one household to the next to cause the huge number of cases that we saw during the Black Death epidemics," said Dr Tim Brooks from Porton Down, who will put his theory in a Channel 4 documentary, Secret History: The Return of the Black Death, next Sunday. To support his argument, Brooks has looked at what happened in Suffolk in 1906 when plague killed a family and then spread to a neighbour who had come to help. The culprit was pneumonic plague, which had settled in the lungs of the victims and was spread through infected breath. The skeletons at Charterhouse Square reveal that the population of London was also in generally poor health when the disease struck. Crossrail's archaeology contractor, Don Walker, and Jelena Bekvalacs of the Museum of London found evidence of rickets, anaemia, bad teeth and childhood malnutrition. In support of the case that this was a fast-acting, direct contagion, archaeologist Dr Barney Sloane found that in the medieval City of London all wills had to be registered at the Court of Hustings. These led him to believe that 60% of Londoners were wiped out. Antibiotics can today prevent the disease from becoming pneumonic. In the spring of 1349, the death rate did not ease until Pentecost on 31 May.

at Bermondsey tube station when the jubilee line extension was built they had to remove an ancient  Benedictine burial ground from Bermondsey abbey [long dissolved by king Henry the eighth at the dissolution of the monasteries in the reformation ]  after the remains had been removed [ I was involved in this excavation for Museum of London ]  the station was built  and immediately there was reports of ghost monks being seen   these stories often come up when burials are disturbed  whether ghost monks or any one wander about   who knows .

I worked for the museum of London  these burials often turn up  when deep digging is done  especially drains and rail tunnels. I handled lots of medieval skeletons like this .