Computer-scan images of the ‘real’ boy pharaoh are crass and morbid. Archaeological techniques should be used to enhance our understanding of the past, not destroy its mysteries 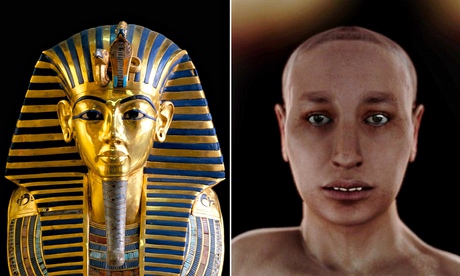 The gold mask of Tutankhamun and a 'virtual autopsy' composed of more than 2,000 computer scans. Photograph: Alamy/BBC

Leave poor Tutankhamun alone. Hands off the boy king. Let him sleep his eternal sleep in the dignity of his golden mask.

If there really was a curse of the pharoahs, then scorpions and scarab beetles would surely be crawling right now into the pants of those responsible for archaeology’s latest attack on the dignity of the dead. A “virtual autopsy” of Tutankhamun has revealed – as one report has it –“The REAL face of King Tut”. That face turns out to be distinctly unhealthy looking, with bad teeth (shock) in the digitally constructed image of a young man whose congenital problems in a world without modern medicine probably decided his short life span. As the same headline continues, “Pharaoh had girlish hips, a club foot and buck teeth …”

The “virtual autopsy” that revealed Tutankhamun’s ailments has been performed for a BBC programme – Tutankhamun: The Truth Uncovered – that will be broadcast next Sunday. It has produced not only a sickly portrait of the young ruler of ancient Egypt, but also a full-length image of him with a club foot and ungainly body, leaning on a stick.

New scanning methods and digital imaging offer new ways of getting inside Egyptian mummies and other biological relics, giving faces, flesh and even internal organs to the dead. But like any scientific breakthrough, these techniques need to be used with intelligence and sensitivity. Performing a highly promoted virtual autopsy on Tutankhamun is not a sensitive investigation of a life, helping us to imagine or understand the past. It is a morbid freak show that reduces the mystery of this once-forgotten pharaoh and his magnificent tomb to crass and vulgar infotainment.

Obsessively investigating the causes of Tutankhamun’s death and his state of health is in any case to miss the point of his enduring appeal. The individuality of Tutankhamun does not matter that much. It is not even a big puzzle, for the basic facts of this boy king’s career are embedded in the very survival of his grave.

Most of the tombs of the pharaohs in Egypt’s Valley of the Kings were looted by ancient tomb robbers long before archaeologists reached them. It came as a revelation in 1922 when Howard Carter, funded by the Earl of Carnarvon, found the hidden burial chamber of one forgotten pharaoh untouched.

It was because Tutankhamun was a short-lived, unimportant ruler that his tomb had been concealed behind others and forgotten about. It was because he was a nobody that his remains and their golden trappings survived so well. We don’t need endless investigations and theories – not long ago, highly publicised TV documentaries were revealing the “truth” that Tutankhamun died in a hunting accident; before that, murder was the theory of the day – to “explain” Tutankhamun’s death.

For the appeal of his spectacular relics and remains is universal, not individual. Tutankhamun’s sarcophagus lies in the Cairo Museum surrounded by his beautiful, fragile tomb treasures. There are rooms full of his dismantled chariots, hunting weapons, elegant chairs, board games, statues and jewels. Then you come to his coffins, his amulets, and masks. Most moving of all is to stand in front of his golden death mask, looking into its timeless eyes. This is not an encounter with wealth, or even with history, but with the human impulse to survive. The dream of immortality has never been given such mesmerising expression. We see our own fear of death and longing to live reflected in Tutankhamun’s frozen eyes.

You don’t have to visit Egypt to feel the fascination of the ancient Egyptian dead. In the British Museum in London many mummies of less famous people lie in painted cases, such as Artemidorus, a young Egyptian from Roman times whose lifelike portrait in the “Fayoum” style is still fixed on to his unwrapped, gilded mummy. Looking into the eyes of Artemidorus is just as moving as gazing on Tutankhamun. The works of art the Egyptians created tell us so much about the people they ennoble.

The British Museum has also shown the way to use modern medical techniques with sensitivity. It recently exhibited some of its mummies along with interactive displays that let visitors virtually “unwrap” them and see internal organs and injuries as revealed by hi-tech hospital scans. The anatomical insights were shown as spectral, spooky, elusive images – not as lurid simulacra. It was moving to learn about the lives and deaths of these ancient people while at the same time seeing their mummy cases and masks.

It is perfectly possible, then, to investigate the dead without insulting them. A bit of delicacy can bring science and art together in a properly engaged and sympathetic revelation of the past.

The bodies of the dead, intentionally mummified or accidentally preserved in bogs and ice, are invaluable to archaeology and to anyone who wants to imagine the human story. Seamus Heaney’s poemStrange Fruit about a sacrificial victim preserved in peat bog reveals the lyrical power of such remains. To reduce all that to simulacra that look like characters in a video game is a betrayal of everything archaeology should be about.